Vizcaínos: The Scourge of the Empire and Uncomfortable Identities

What a Vizcaíno is in the literature of the 16th and 17th centuries has always been a puzzle due to the different uses given to the word. The connotation of the term Vizcaíno can go from an insult similar to “thief,” “traitor,” even “Portuguese,” to, in other cases, “stupid,” “gregarious,” or simply different. In other words, the Vizcaíno is a paradigmatic Other, which seems to have become an insider Other (nothing could be more enervating for some in Spain, or more nostalgic for others than the “insiderness” of this quintessential Other). And unfortunately, in this case, otherness has been the companion of both hate and nostalgia, which seem to be extreme emotional expressions that justify numerous slanders, acts of violence, and overcompensations. “The Vizcaíno effect” has become a systemic mark in the understanding of Spanish and Basque identities in the long process of nation building, probably based on the long term construction of misperceptions, miscommunications, and opportunistic manipulations of all sorts. These misperceptions are not far away from hate speech. Many times comments about Basques pass by as humoristic in our readings of the early modern literature, but perhaps it is pertinent to locate them as a part of the so-called “Triangular Hate Scale” (Sternberg, The Nature 217). First comes the verbal negation of intimacy with the target group, later passions are verbalized; finally there is a commitment to act and propagate the sentiment of hate (Sternberg, The Nature 217). In this article, I aim to make a reflexion about the expression of hate surrounding the basque speaker in the early modern period. 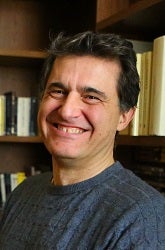 Juan Pablo Gil-Osle after nine years of work as a Basque, French and Spanish translator and interpreter came to the U.S. to complete his doctorate at the University of Chicago. Currently he is Associate Professor of Spanish early modern literature at Arizona State University; after having held positions at the University of Michigan and Arkansas State University. His recent publications concerning Basque Studies touch on the concepts of originality and plagiarism in Obabakoak by Bernardo Atxaga; the 2006 commemorations of Francis Xavier in books, websites, and exhibits; the linguistic description of the “vascongados” in Cabeza de Vaca’s Naufragios; and Iban Zaldua’s essay on how to write Basque fiction. Right now, his two big projects are: finishing his next book’s title is Early Global Modernity, where the Basque component is fundamental; and organizing, with the generous help of the American Council for Learned Societies and The University of Chicago, a conference on early modern Chinese and Spanish theaters, in Hong Kong in June 2018.