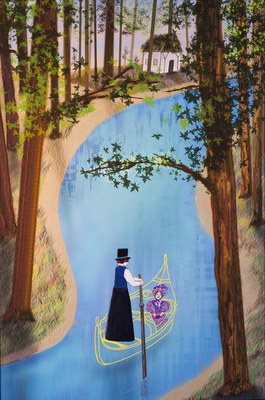 The vision of this body of work is to illustrate the complexities of character that I discovered through many hours of researching my subject, Anne Lister. Each part of these illustrations represents an aspect of the layered symbolism of Anne, and take time to decode, weigh, and interpret. I hope viewers will become intrigued, stay longer with the work, and come away with questions that have them digging deeper into the subject. In that way, they can appreciate the process of research and assembling of symbols that I have gone through to create these illustrations.

Ann Lister was a wealthy landowner born at the end of the eighteenth century, in West Yorkshire, England. She was an impressive diarist who wrote twenty-seven journals. Some of her five million words of text were in a self-created cypher, attesting to her intelligence and desire for privacy. Her coded journals document her passionate love affairs with other women. Nicknamed ‘Gentleman Jack’ by her community, she was considered to be the first modern lesbian. She openly courted women, many of whom seemed most willing to fall under her spell. Anne dressed in black but did not bother with the frills that her contemporaries used. Her home base was Shibden Hall, where she took care of her tenants, and experimented with landscaping the grounds. She also loved learning, spending hours reading scholarly texts, and visiting neighbors. In addition, she was an adventurer, and when able to leave Shibden Halls, she was off in other countries climbing mountains and being introduced in society.

I Know My Own Heart is the title of my first illustration, and is composed in the shape of an exclamation point. This work is a conceptual idea combining Anne’s interest in the human body and her desire to educate herself in a time when women were not allowed to attend college. Anne wrote in her journal, “I know my own heart and understand my fellow man. But I am made like no other I have ever met. I dare say I am like no one in the whole world.” Her declaration of how she feels about herself is incorporated in the design with her body separate from the heart below. Anne Lister was an intense personality and was confident about her interest in women.

Going to Italy is the title of my second illustration, and is about Anne’s desire to find a wife. She writes, “I love and only love the fair sex and thus beloved by them in turn, my heart revolts from any love but theirs.” The gondola boat is a symbol for the gold pin she gifted to Ann Walker, a neighboring landowner she was courting. Also, ‘going to Italy,’ was her reference to a sexual relationship. The moss hut was commissioned by Anne with the idea of privacy: She wanted a place where she could spend time away from watchful eyes. It was then built during a time when she was updating the grounds of the estate. Anne commissioned the specific placing and planting of thousands of trees on the Shibden Hall estate grounds, making them more majestic.