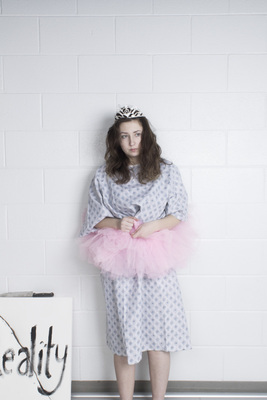 This work is part of the series entitled Skitsəˈfrēnēə.

The following 6-piece photo project looks at the struggles of those struggling with their mental health and the marginalization they face due to their disorders/illnesses and is juxtaposed against the privilege of those who do not suffer from mental health disorders/illnesses. The analyzation of this social issue focuses on the life of my late mother, Helen Marie Barrett, who suffered from paranoia schizophrenia since she had been diagnosed with the mental illness at the age of eighteen.

My mother, Helen Marie Barrett, died in 2014. I was 19-years-old, and the only child out of three where my mom was mentally capable of raising by herself for eighteen years. During that time, I became a witness to her life that suffered from paranoia schizophrenia. Since her death, I’ve reflected on a lot of “what ifs.” But the biggest what-if I kept thinking about was:

What if she wasn’t schizophrenic?

During our time together, I watched her struggle to adapt to society’s standards and expectations what of a productive, contributing member should be. She wanted a successful career, a meaningful marriage, and to easily make lasting friendships. But throughout most of her life, she struggled to hold a basic minimum wage job, she never developed a healthy, lasting, romantic relationship with someone, and she was regularly out-casted at numerous social gatherings (due to her marital status, among other reasons). All of these obstacles that kept her from leading a normal life lead back to the source of her problems: her schizophrenia.

My mom was always split from our reality, only existing within her own; as the Grecian root word of schizophrenia suggests, “split mind.” Her mental inability to accept our reality prevented her from meeting society’s expectations.

This body of work presents my mother in two different settings: one where it explores the “what-if?” What if her life existed without paranoia schizophrenia? The other setting presents the reality she lived with, struggling with her mental illness.

In the first setting, all of the images are shot with a black background to portray the professional photo studio setting that people often get their portraits taken at. These images are contained within black frames commonly seen in well-adjusted households, further emphasizing the idea of conformity. The model in this setting wears contemporary clothing items to demonstrate that she is a well-adjusted member of society and is consciously aware to the cultural norms around her. She is surrounded by what my mother did not have — cultural capital, a loving partner, and being valued as an individual.

Images in the second setting are shot with a background similar to the mental institutions my mom would have been exposed to during her most unstable periods: white walls and tile floors with no trace of color, emphasizing the bleak life for those held in such places with little human compassion. In this setting, the model wears a hospital gown, a pink tutu, tiara, and a glittery gold wand. My family informed during the peak of her mental instability she believed that she was a fairy princess. The model is surrounded by what was hardest of dealing with her schizophrenia — loneliness, medication, and being devalued as a human. The images have no frame to contain these photo works. There is no glass between the viewer and the image. The confrontation between the image presents to the viewer is more intimate as there is no barrier between the two.