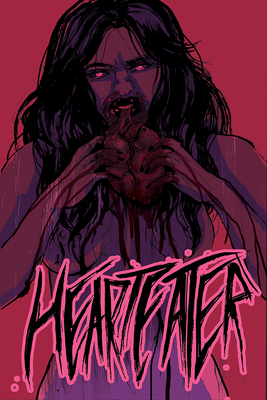 This piece is part of a larger work entitled Hearteater.

Sometimes, monsters are real. But they might not look how you imagine them. They may not tear open chests, and devour hearts, but the damage they do can be equally devastating.

Hearteater is a 28 page, fully colored illustrated graphic novel in a 7x10” format. The lineart of the pages was created traditionally with FW acrylic inks and paint on 11x17” bristol board. After the initial lineart was complete, each page was scanned and then colored in Adobe Photoshop.

The story follows a young woman as she stalks bars and other venues in search of victims, seeking out their heart to eat. All of this follows a scene of her examining a scar over her chest, implying her own heart is missing, and compelling the viewer to wonder if she is searching for another’s heart to replace her own, or if she simply hungers for them.

Throughout the story, we witness her killing a number of victims and devouring their hearts, though she is seemingly never sated. As the story progresses, she eventually meets another young woman whose heart she desires, but upon taking her back home, discovers that this new victim has a similar scar over her chest, implying she too is missing her heart.

This causes the main character to reflect on her actions and her reason behind them, only to wake up in her therapist’s office, where it’s revealed that her devouring of hearts is a metaphor for her abuse, and the way victim’s of abuse sometimes revert to mimicking their abuser’s behavior in order to make sense of or justify what happened to them. All of the devouring of hearts was simply how she imagined her actions in her head, as a way to cope with her past, and the way she was treating new people who came into her life, as she sought new reason for living.

This story is a reflection of my own experiences with emotional abuse, and how I processed the events of my past, before coming to the realization that hurting others did nothing to make me feel better, or fill the metaphorical hole in my chest where my heart once was. It also comments on the way abusers themselves tend to have “missing hearts,” taken by people before them-- as abusers are made, not born.

Writing this story and creating the correlating illustrations were therapeutic for me, and allowed me to really consider my memories of my past abusive relationship and the way it has affected me in the long term, as well as how far I’ve come from the person it originally made me. While I never devoured any hearts, I like to think the story in this graphic novels follows my own personal story of growth and accepting what happened to me. While it was an ugly part of my life, I wanted to make something beautiful of it.