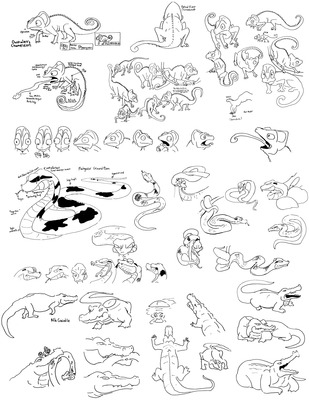 It seems to me that the more time I spend planning every little detail of something, the less time I actually spend following that plan. I say this because the works that I have included in this exhibition are a compilation of conceptual artwork pieces; these pieces are designed to be displayed together. They depict the process of how illustrators can design and develop characters, as well as alter and adapt them to fit the various needs of a multitude of media. However, initially when I began to work on this project, there was no story. It was just me, some pens, a lot of optimism, and the insane idea of creating a monstrously sized, multi-canvas oil painting masterpiece.

This painting was to have layers of symbolism and deep meaningful, meanings, which would not only be interesting but also a little vague, so as not be readily apparent, and thus highly confusing without a written guide. The piece was going to depict the idea of how the individual is changed by their past decisions and thus adapts to their present surroundings based on what they have chosen. Because, this present state is always in flux due to time’s constant forward momentum, the present is constantly becoming the past, and thus every action and decision we make ultimately affects our unpredictable, but expected future choices. With this in mind, I made the decision to use reptiles as symbols to represent the ideas simply because I enjoy designing creatures based on their real life counterparts. I chose these ones specifically because a chameleon possesses the ability to adapt to their surroundings. A snake’s body can form both circular shapes, which is like the cyclical process of how past decisions influence our future ones, and tunnel-esque, like the movement of time, and the crocodile, which has many means of attack at his disposal, is an unpredictable, but patient creature, just as the future is lying in wait.

Now, if you have already looked at the pieces on the wall, and are merely reading this statement to reaffirm your suspicions that this grand meaning existed but has since shifted from being the focus of the piece to merely the inspiration then, I applaud you, because that is not an easy task. However, if you had continued to read past the first paragraph of this statement because you were in fact curious, and wondered internally, if there was anything more to this artwork than what I already told you. Thinking to yourself that there has got be something more that you are missing because you are in a gallery exhibition and this is art, and it seems too simple to just call the art concept art illustrations then, I applaud you for being normal. That being said, it is what it is, and although, my grand plan didn’t pan out quite the way that I had envisioned; I feel that it has actually turned out for the better, because this way it fits into my car.